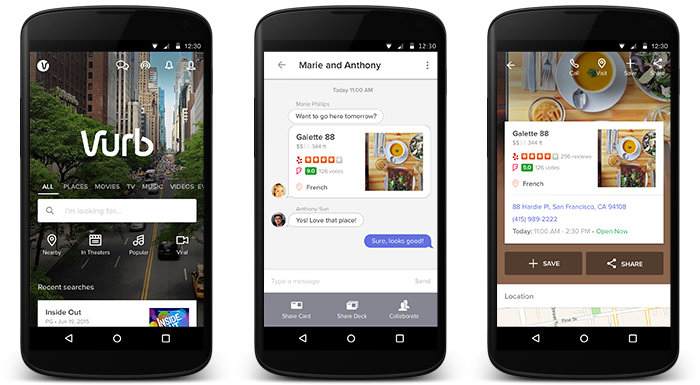 Our team has been working tirelessly to make our new Android app everything you’ve come to expect from us and more. It has all the bells and whistles the iPhone version has but is carefully crafted with a Google finish. We’ve kickstarted our Vurb community with iPhone users and can’t wait for Android users to join in. Create and share Decks, like your own bucket lists and favorite places, music, movies, and more. Follow other Vurbies and make plans with each other. There is so much more we can do now that we are all together.

After listening to your feedback, we learned that you love using Vurb to build Decks and find places to go, but that Vurb would be even easier to use if you could chat directly into the app. It’s no secret that group texts can be underwhelming and complicated. Vurb Chat changes that. Now, you can communicate in a much more functional way by having the ability to share all of your Vurb Cards and Decks directly in the app. 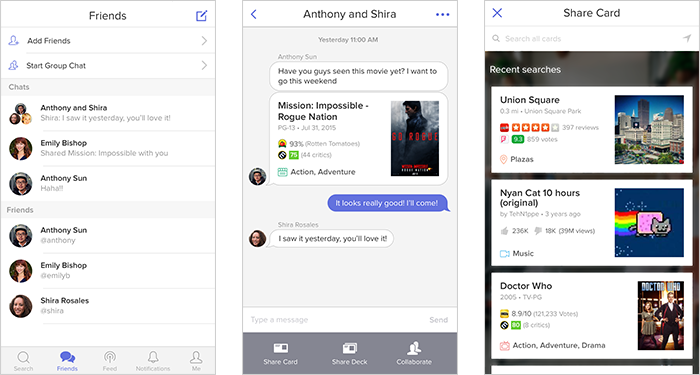 Plan a Night Out Together
Suggest a place to go in a Vurb Chat, and your friends will have directions, photos, and reviews. You can both book a reservation, purchase movie tickets, then call an Uber or Lyft, all within the app from the chat screen.

Build Bucket Lists Together
Build “Concerts To See”, “Favorite TV Shows to Binge On” or “World Wonders to Visit” with your friends and loved ones.

Plan Trips Together
No more spreadsheets! Share, edit, and comment on Cards and Decks right from Vurb Chat so you and your friends can collectively create Decks.

The possibilities are endless. Invite your friends to Vurb and change the way you chat forever.

The Future of Apps

We love apps. And we know the rest of the world does too. For instance, we’ve seen the booming rise of single-purpose apps in the U.S. and across the West. However, there are now over 1.5 million apps across the app stores that don’t communicate with each other. For users, choosing the right apps to use, or even knowing that they exist, is exhausting. Then, to get a task done like planning a night out, you have to hop back and forth between seven or more apps.

Taking the “constellation” of different apps and connecting them in a centralized hub will create a better user experience. We’ve already seen this model of plugging multiple services into one app work very successfully with WeChat, the top messaging app in China made by global Internet powerhouse Tencent—now also an investor in Vurb.